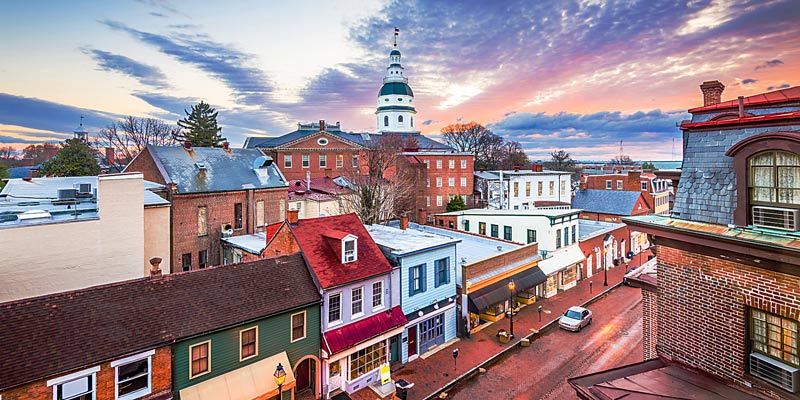 Annapolis is the state capital of Maryland. It’s located on the Chesapeake Bay, 25 miles south of Baltimore and 30 miles east of Washington, D.C. Annapolis is a white-collar city with some of the most expensive homes in America. The city is full of professionals, service providers, and managers. Although a large percentage of the workforce tends to work in fields using computers and math, Annapolis also has more artists, designers, and people working in media than 90 percent of communities in Annapolis, which makes it unique. The city tends to attract young, educated professionals. Annapolis originally started out as “Town at Proctor's," then "Town at the Severn," and later "Anne Arundel's Towne" (after Lady Ann Arundell (1616–1649). She was the wife of Cecilus Calvert, second Lord Baltimore, who died soon afterward). The town was later renamed Annapolis after Princess Anne of Denmark and Norway who would soon become Queen Anne of Great Britain. It was incorporated as a city in 1708. Although 17-century Annapolis was little more than a village, the city grew rapidly for most of the 18th century until the Revolutionary War. It was a political and administrative capital, a port of entry, and a major center of the Atlantic slave trade. It even became the first temporary capital of the United States after the Treaty of Paris was signed. Things to Do  Population: 40,113  Schools   Major Employers  Fun Facts
The data relating to real estate for sale on this website appears in part through the BRIGHT Internet Data Exchange program, a voluntary cooperative exchange of property listing data between licensed real estate brokerage firms in which Vinny Steo - Your Home Sold Guaranteed Realty participates, and is provided by BRIGHT through a licensing agreement. The information provided by this website is for the personal, non-commercial use of consumers and may not be used for any purpose other than to identify prospective properties consumers may be interested in purchasing. Some properties which appear for sale on this website may no longer be available because they are under contract, have Closed or are no longer being offered for sale. © 2022 BRIGHT, All Rights Reserved Information Deemed Reliable But Not Guaranteed. Data last updated: December 4, 2022 8 PM.