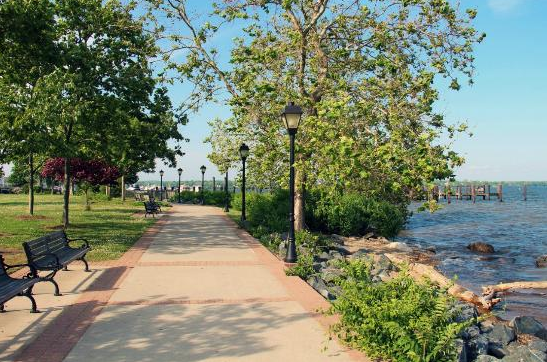 Havre De Grace is a city in Harford County, Maryland, situated at the mouth of the Susquehanna River and the head of the Chesapeake Bay. It is approximately 40 miles from Baltimore, 65 miles from Philadelphia, and 77 miles from Washington, D.C. The city was named after the port city of Le Havre, France.  The city has been honored as one of the 20 best small towns in the U.S. to visit by Smithsonian Magazine. Havre De Grace is a Chesapeake Bay hidden gem, with a charming downtown, waterfront restaurants and museums dedicated to the region’s maritime history. Interestingly, Havre de Grace was once considered for the site of the nation’s capital. It lost by one vote!


Havre De Grace has one of the great boardwalk/promenades in The U.S. which runs from Tydings Park to the Concord Point Lighthouse. Where the Susquehanna River joins into the Chesapeake Bay at Concord Point, visitors can see beautiful sunrises (if they arrive early enough). The lighthouse is the oldest in Maryland, built in 1827.


Harford County, Maryland has one of the best-ranked school districts in Maryland and the U.S. Harford County is also in the top 10 on Money Magazine’s list of America’s best places to live.


Havre De Grace contains more than 3,000 acres of parkland featuring hiking and biking trails and picnic areas along the water’s edge. It is also near Susquehanna State Park, one of the regions top destinations for boating, fishing, hiking, camping and picnicking.

The data relating to real estate for sale on this website appears in part through the BRIGHT Internet Data Exchange program, a voluntary cooperative exchange of property listing data between licensed real estate brokerage firms in which RE/MAX Community - Proudly Serving Maryland Families For More Than 16 Years participates, and is provided by BRIGHT through a licensing agreement. The information provided by this website is for the personal, non-commercial use of consumers and may not be used for any purpose other than to identify prospective properties consumers may be interested in purchasing. Some properties which appear for sale on this website may no longer be available because they are under contract, have Closed or are no longer being offered for sale. © 2022 BRIGHT, All Rights Reserved Information Deemed Reliable But Not Guaranteed. Data last updated: January 23, 2022 9 AM.